Lupin is a French action and adventure mystery series created by George Kay. The series follows the exploits of Assane Diop, a gentleman thief who styles himself as a modern-day Arsène Lupin.

The series made its debut on the service Friday, January 8, 2021, and quickly became the first French series to land on the streamer’s U.S. Top 10 list.[1] The first part of the series set a global benchmark for a French show on the Netflix service, having reached 76 million households worldwide during its first 28 days.[2][3]

"Inspired by the adventures of Arsène Lupin, gentleman thief Assane Diop sets out to avenge his father for an injustice inflicted by a wealthy family."
—Official Netflix synopsis

Lupin - Behind the Scenes - Netflix

Lupin Part 2- Settling the Score - Behind the Scenes - Netflix

Lupin - How Do You Say Lupin? - Netflix 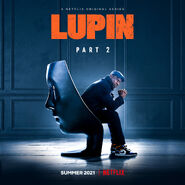