Welcome To Eden (Spanish: Bienvenidos a Edén) is a Spanish drama series created and written by Joaquín Górriz and Guillermo López Sanchez.

On May 25, 2022, Netflix announced that Welcome To Eden would be renewed for a second season. In this season, the Eden Foundation welcome new members. New cast members include Carlos Torres and Nona Sobo. Season 2 was filmed in Lanzarote, Barcelona and Teruel.[2]

"Are you happy? With this question Zoa and four young, attractive and social media active boys and girls are invited to the most exclusive party in history, set in a secret island and organized by the brand of a new drink. What starts as an exciting adventure will soon turn into the trip of their lives. But paradise is not really what it seems... Welcome to Eden."
—Official Netflix synopsis

Zoa and Judith sit at a table

Bel with a horse

Orson and Eloy in a horse stable

Claudia and Bel talk at night

Judith and Orson at a bar

Nico and Zoa on the beach

África takes a selfie at the party

Astrid at the evaluation

The 5 new members walk on the beach

África and Mayka take a selfie

Judith and Zoa on a boat

Nico and Zoa in Module 1

Ulises with his arms folded

Zoa by the lake

Mayka in the IT room

Zoa on her phone

The promotional video about the exclusive party by Blue Eden

África searched after she passed through the detectors

Zoa and África at the tour of Eden

Aldo followed by a drone

Aldo steals a 4WD to try to escape Eden

Nico and Zoa at the beach

Mayka at a party

Astrid brings África to her place

Ibón signs a contract to stay at Eden

Zoa and Ibón in a cave

Gabi cuts her hair to look more like Zoa

Zoa is summoned to Astrid and Erick's place

Erick and Astrid are threatened at their anniversary party

Eloy and Ibón in their module at night

Gabi and Brisa on a bus

Alma talks to Ibón about working security and Eloy

Brisa extracts the chip from the wristband

Zoa sees Gabi on the boat to go to Eden 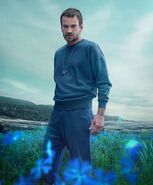 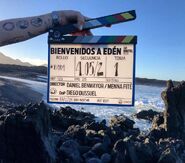