Netflix Wiki
Register
Don't have an account?
Sign In
Advertisement
in: Movies, Comedy, Movies Based on Books,
and 4 more

Justin Malen
Amy Krouse Rosenthal (based on the book by)

English
YES DAY is an American comedy film, directed by Miguel Arteta, and a screen story and screenplay by Justin Malen. It is based upon the children's book of the same name by Amy Krouse Rosenthal and Tom Lichtenheld.

"Tired of always saying no, a couple gives their kids one whole day to make the rules, kicking off a wild family adventure. Jennifer Garner stars."
—Official Netflix synopsis

Allison and Carlos Torres are married with three kids: Katie, Nando and Ellie. When they first met, they were adventurous and said yes to everything. However, once having kids, they feel they must say no to protect their children.

One evening, they are called into a parent-teacher conference at school where they discover Katie and Nando have both submitted school work calling their mom a dictator. Allison expresses frustration that her kids perceive her this way and tells Carlos that she feels he makes her play the role of "bad cop" with their children. Mr. Deacon, a school employee and father of six, overhears and shares with them that he maintains order in his house by having a 'yes day' from time to time: one 24-hour period where the parents cannot say no, within reason.

Carlos and Allison present the idea to the kids, telling them that if they don't get into trouble, do their chores and keep their grades up, they can have a yes day as a reward. Katie makes a wager with Allison that if her mom makes it through Yes Day, Katie will go to the music festival Fleekfest with her mother. If she doesn't make it, Katie will be allowed to go with a friend, Layla. The kids eventually manage to earn a yes day and put together a list of five activities for the day. First, Ellie dresses her parents in crazy outfits and requests that they don't look at anything with a screen on it all day. Next, they go and order a massive $40 sundae that is free if they can eat it all in 30 minutes. They then go through a car wash with the windows down. Next, they go to a capture the flag competition, where each family member leads a group and the goal is for one team to catch the others, throwing balloons filled with Kool-Aid at their opponents. Allison wins the game for her team, impressing her kids. Carlos, however, is tempted to drop out of Yes Day, but ultimately decides he can't bear to disappoint his kids.

The fourth event is a trip to Six Flags Magic Mountain, where the family ride roller coasters. When Katie steps away, Allison sees texts on her daughter's phone from Layla indicating she and Katie will be hanging out with older boys at Fleekfest. Allison tells her that the wager is off and she's going to Fleekfest with her, not Layla. Hurt, Katie storms off. In an attempt to win a pink gorilla for Katie as an apology, Allison and Carlos get into a fight with another park-goer and are arrested. The children sneak away. Katie goes to Fleekfest with Layla, but quickly becomes uncomfortable being alone with older boys, and her friend abandons her. Nando stages a "nerd party" at the house as the final big event, but it quickly gets out of control when Ellie accidentally sets off a foam explosion inside the house that was meant for the back yard. Meanwhile, Katie's phone dies while trying to contact her siblings and she panics. With help from H.E.R., who is performing at the event, Allison finds Katie and they reconcile. H.E.R. is moved and invites them onstage for a song. Carlos arrives home and finally manages to be a disciplinarian, forcing the party to stop and the kids to help with the cleanup. As Yes Day draws to a close, Ellie makes one final request. They all spend the night playing games as a family in a tent in the back yard, until Nando's foam bomb (having been flushed down the toilet) starts to fill up the house.

In a mid-credits scene, the Torres family and other players pelt Mr. Deacon with Kool Aid balloons at the Capture the Flag field as revenge for suggesting Yes Day in the first place.

How Many Times Do They Say 'Yes' in Yes Day? 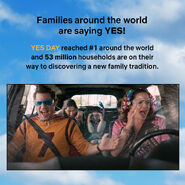